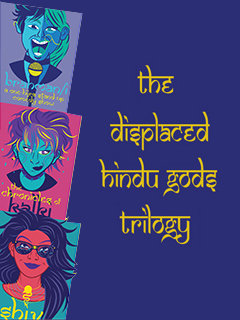 THE CHRONICLES OF KALKI
Directed by M. Bevin O’Gara

Loosely inspired by the Hindu trinity of Brahma the creator, Vishnu the protector, and Shiva the destroyer, THE DISPLACED HINDU GODS TRILOGY posits that deities dwell among us in the bodies of the most unexpected underdogs. Identity, post-colonialism, puberty, and love are re-mythologized as history is made new in these three hilarious and heartbreaking coming of age stories.

THE CHRONICLES OF KALKI:
It's raining cats and dogs... and the final avatar of Vishnu? Totally badass Kalki mysteriously springs into the mean girl world of high school in this comic-book-infused girl gang thriller.

SHIV:
Shiv, named for the Destroyer God, sails the cosmic ocean on a makeshift raft piled high with the psychic residue of post-colonialism. Drawn by distant radio signals, she navigates the poetry of her past and the possibilities of love in a soaring, fantastical journey about the destruction that leads to rebirth.

BRAHMAN/I is both hilarious and deeply moving in its exploration of gender, identity, and meddling family members. This play gives voice to all those who have embraced their outsider status and who now play by their own rules. Company One Theatre is thrilled to further our relationship with Aditi Brennan Kapil (LOVE PERSON) with this exciting and provocative trilogy of plays based on the Hindu trinity of Brahma, Vishnu, and Shiva.

THE CHRONICLES OF KALKI: This thrilling, fast paced play will leave you questioning the line between reality and the supernatural. What are high schoolers capable of summoning? And who exactly is Kalki anyway? Company One Theatre is thrilled to further our relationship with Aditi Brennan Kapil (LOVE PERSON) with this exciting and provocative trilogy of plays based on the Hindu trinity of Brahma, Vishnu, and Shiva.

SHIV: Board your time-traveling mattress and come sail across the cosmic ocean with us! SHIV explores the nature of family, immigration, and what one must do to truly progress. Company One Theatre is thrilled to further our relationship with Aditi Brennan Kapil (LOVE PERSON) with this exciting and provocative trilogy of plays based on the Hindu trinity of Brahma, Vishnu, and Shiva.

COMIC ONE MOMENT, ENLIGHTENING THE NEXT
- The Boston Globe

[SHIV IS] MOVING AND PERSONAL
- WBUR's The Artery 
For other Group Sale questions
or requests, please contact


C1 Presents the new hit from Meat & Beti -
two of our favorite ladies from THE CHRONICLES OF KALKI. Drop it!

Questions about the Trilogy?  Visit our TRILOGY FAQ!

Visit THE DISPLACED HINDU GODS TRILOGY rehearsal and production blog to get a sneak peek behind the scenes, as well as access to further dramaturgical resources about each play. The Stage One Team is pleased to present to you our Curricular Connections Packet for Company One Theatre’s production of Aditi Brennan Kapil’s THE DISPLACED HINDU GODS TRILOGY. We’ve developed these materials to facilitate your understanding and engagement with the production and we encourage you to adapt the material to suit your needs.