Stage One uses theatre in the classroom to support young people in the process of becoming changemakers who practice active and responsible citizenship: a skill set that will serve the student, their communities, and ultimately, all of us.

In service of Company One Theatre’s mission to build community at the intersection of art and social change, C1’s Stage One programming focuses on developing authentic relationships with, and among, young people and early career artists, fostering a sense of belonging where they are encouraged to access their voices and express themselves. 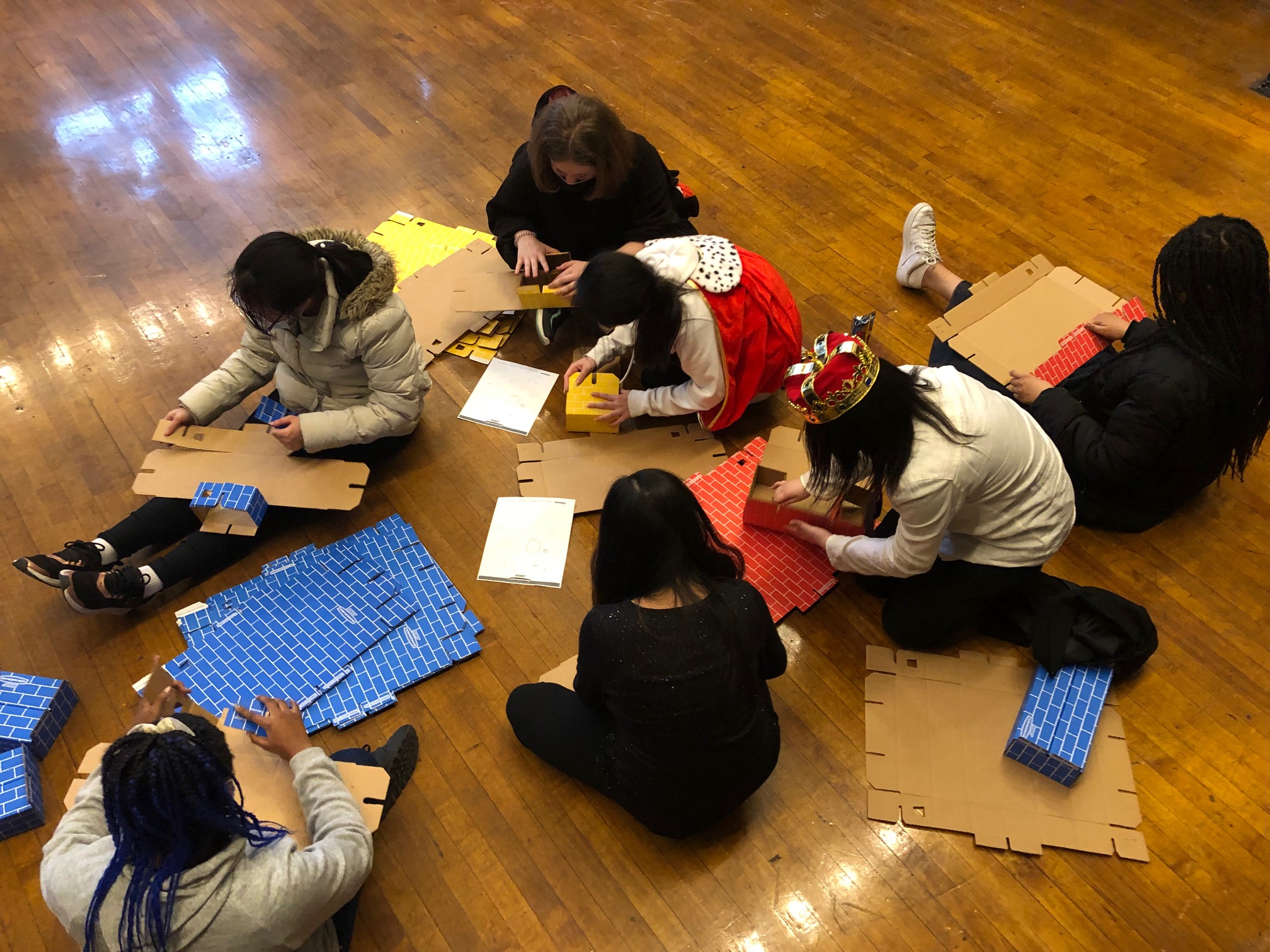 Interested in bringing a Stage One residency to your school? Reach out to Mark VanDerzee, Education Director, at mvanderzee@companyone.org.

Stage One In School residencies put trained teaching artists into the classrooms of Boston Public Schools. Using improvisation and group-based projects chosen and motivated by the class, students learn the tools needed for not only civic engagement, but interpersonal skill building and creative problem solving.

Since 2009, C1’s Stage One In-School residencies have focused on schools that have limited access to arts education due to budget, resource constraints, or structure. We work with each school partner to create a program that fits their unique needs and financial position, allowing the program to grow over time as the school becomes able to build it into its overall budget planning. The program strengthens students’ authority, voice, and point of view, while developing young artists into the next generation of changemakers.

We offer both theatre electives and theatre integration into ELL/ESL, ELA, and Humanities classes. 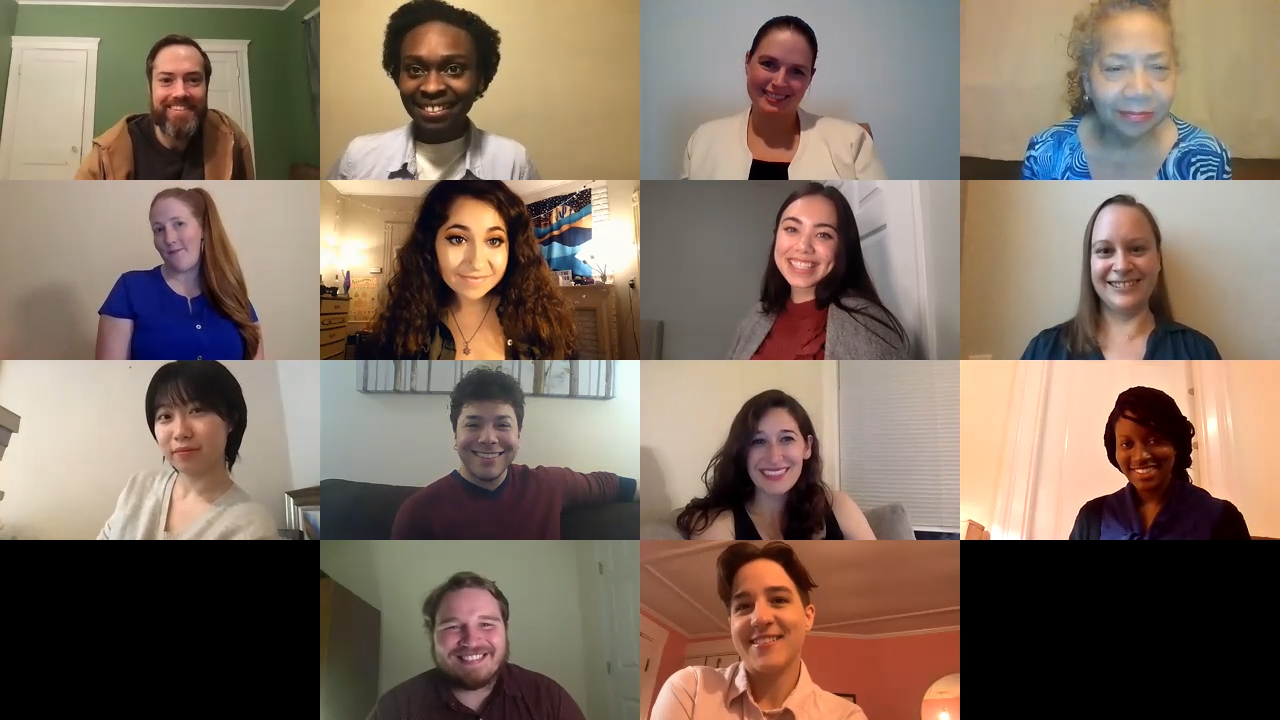 The Professional Development for Actors course provides a low cost alternative to expensive theatre courses offered by higher education institutions. Stage One aims to bridge the wealth gap often associated with training in the arts as we believe that cost shouldn’t be a barrier to gain the skills needed to work in theatre.

Instructor Josh Glenn-Kayden describes the program as “an opportunity for actors to grow both as performers and culturally conscious theatermakers within a supportive artistic community.” Performers will hone their craft through in-depth character script analysis and monologue work, preparing them for future auditions and roles. Performers will also explore their individual responsibility towards equity and social justice as theatre practitioners, an avenue of study not often found in college courses and programming.

Auditions for PDA Spring 2023 are on February 27th! Click here for more info and to sign up for an audition slot. 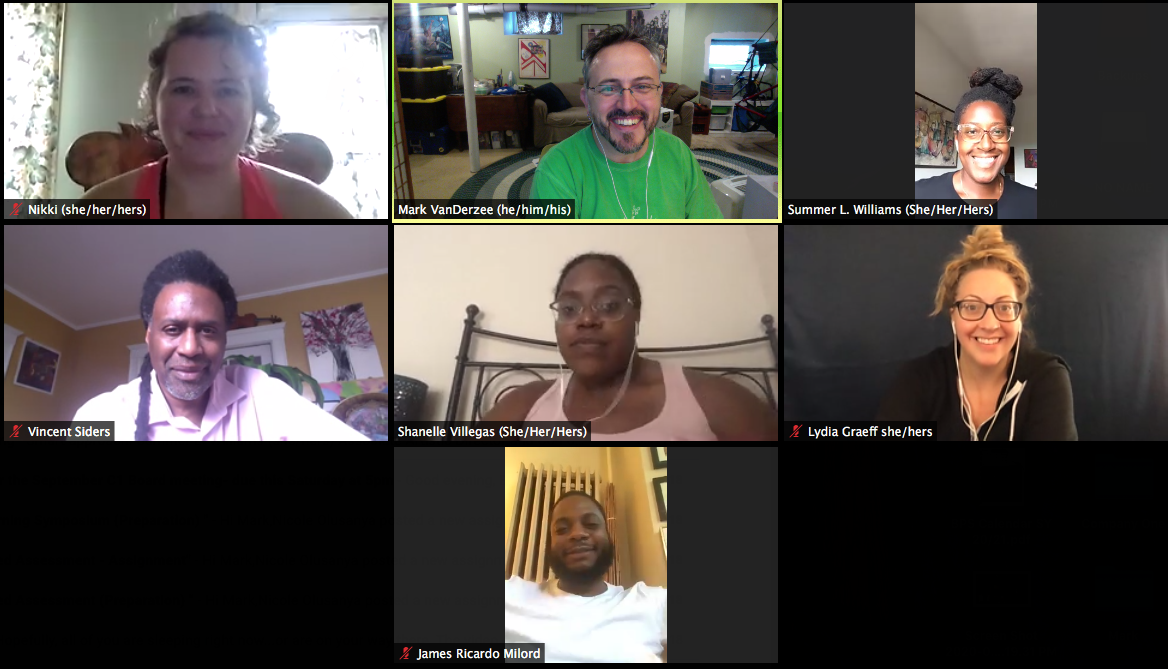 The Professional Development for Educators program originated from Company One’s history of providing robust professional development for our teaching artists. Now, the program has evolved into development opportunities focused on the teachers’ role in creating activism centered lesson plans. Mission driven educators will use theatre integration strategies to cultivate community in their classrooms. By integrating theatre into ESL/ELA/Humanities curriculum, Professional Development for Educators aims to place teaching artists in classrooms where they can have the greatest impact on student’s growth and development.

The continued relevance of Hype Man by Idris Goodwin led to the creation of a filmed, digital experience for high school students, the first in a series that now includes Inda Craig-Galvan’s Black Super Hero Magic Mama and Francisca Da Silveira’s can i touch it?. With the aim of catalyzing important conversations around identity, privilege, and racism, C1 Digital Productions and Learning Experiences are the first in a planned series of teaching tools we are working to make available for teachers to bring into their own classrooms across Boston.

And, while the filmed performances are digital, the experience isn’t. It’s a classroom oriented discussion built around the continued importance of the Black Lives Matter movement and the ongoing need for systemic change.

Our teaching artists bring cultural responsiveness and years of experience to the classrooms of our partner schools. Their ability to adapt to the needs of each class is key to the success of our programs. Through an emphasis on communication, collaboration, and flexibility, these artists are vital additions to any school’s arts programming. 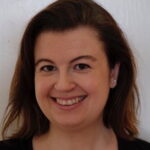 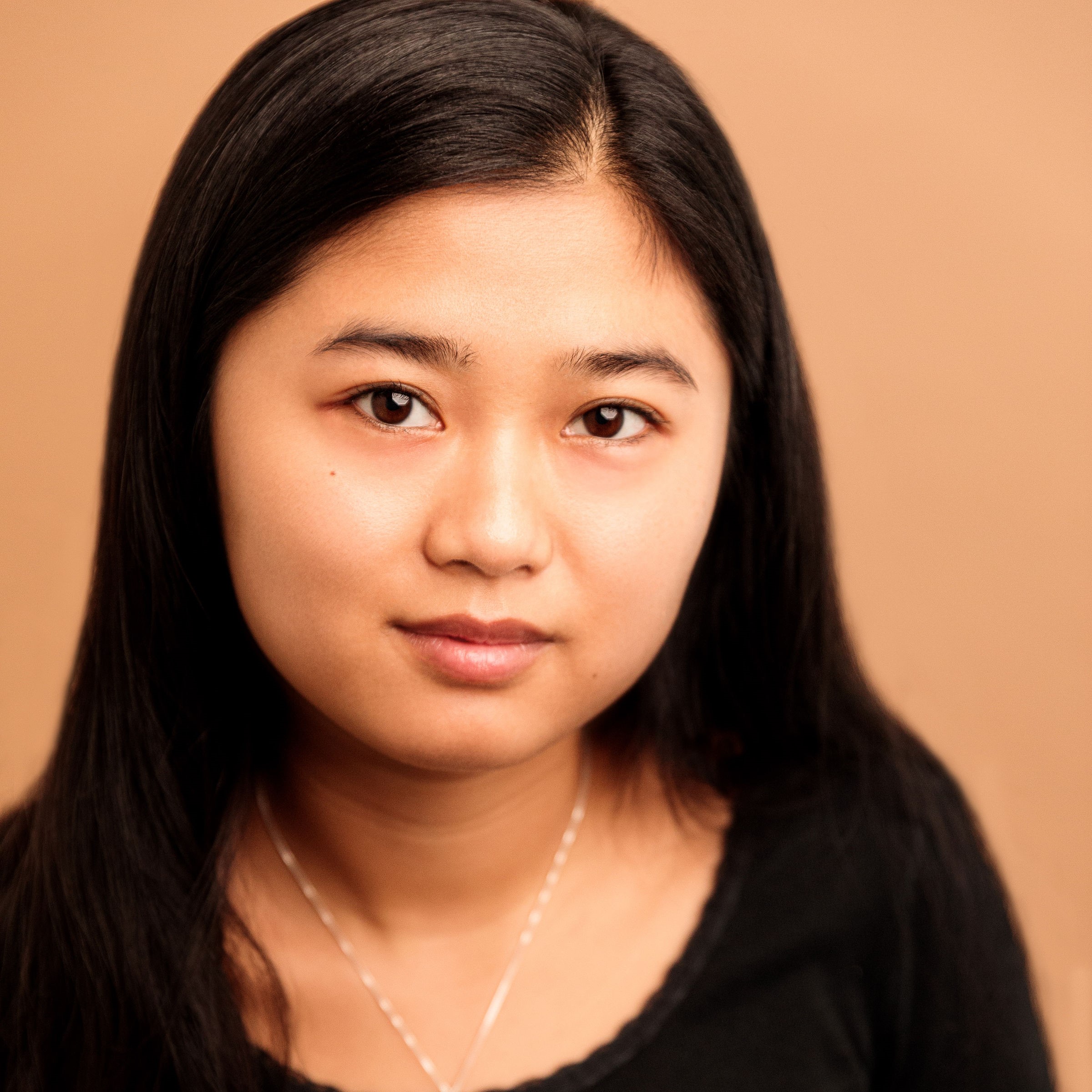 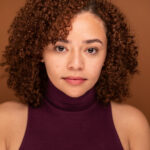 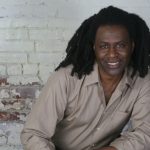 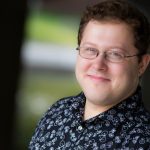 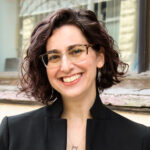 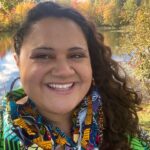 A native of Santa Fe, NM, Vanessa is a theatre artist and educator enthusiastic about fostering social-emotional learning through drama-based pedagogy. A classically trained actor-turned-teacher, she got the teaching bug working at Theatricum Botanicum in Los Angeles as an assistant in their summer Shakespeare camp, and since focused her passions into working with young people in underserved populations of Los Angeles and Boston. In Los Angeles, she worked with Inner City Arts on LA’s Skid Row, bringing arts programs to children of the LA Unified School District. She received theatre training at PCPA-Pacific Conservatory of the Performing Arts in Santa Maria, CA, and holds a BA in Theatre from Santa Fe University of Art and Design. In May 2021, Vanessa earned her M.A. in Theatre Education and Applied Theatre from Emerson College, with a focus on social justice and advocacy through the arts. She has served as a teaching artist for Beyond the 4th Wall in Cambridge, and most recently with Actors’ Shakespeare Project. Click here to read Vanessa’s Teaching Artist Recipe: Vanessa’s Teaching Recipe

Mei MacQuarrie (she/her) earned a B.S. in Biology and minors in Theater and Violin Performance from the University of Massachusetts Amherst, and is eager to pursue her interests in science and the arts. She is passionate about using theater as a medium to creatively invoke conversations and spark change and growth, as well as for discovering a leader in oneself. Her recent work includes being a teaching artist at the Providence Performing Arts Center and acting comprises of Visionary Futures: Science Fiction Theatre for Social Justice Movements by Josh Glenn-Kayden (consists of new plays written by Phaedra Michelle Scott, Jaymes Sanchez, and M Sloth Levine) and Baltimore by Kirsten Greenidge at UMass Amherst. Mei is super excited to be joining the Company One team and being able to work alongside everyone!

Sage X Morgan-Hubbard, Community of Practice Teacher
Sage X Morgan-Hubbard, (MA + all Ph.D. coursework in Performance Studies from Northwestern University, BA in Ethnic Studies & Socially Conscious Arts of the Everyday from Brown University) is the Director of Lab Faculty at College Unbound. She recently was the Assistant Director of the Brown University Center for Students of Color. She is an educator, public speaker, consultant, and dream midwife who co-curates inclusive diverse public spaces for lifelong living and learning for all people. An award-winning poet (founder of WORD! poets and activists and one of the co-founders of Spoken Resistance) social justice artist, and activist, she has worked at four Smithsonian museums and taught students from pre-K through senior citizens, online, incarcerated, and everything in between. Sage uses her creative lens to make sure that everyone has the multimedia tools of poetry, performance, storytelling, collage, and curriculum, they need to bring their dreams to life. She loves aqua aerobics, her two spirited children, her Jindo puppy Broccoli, and her middle name Xaxua, is an onomatopoeia which means the rustling of the leaves in the wind.

Sandra Seoane-Serí is a freelance actor and teaching artist based in Boston. She received her Bachelor of Arts in Theater and Film at the University of Massachusetts, Amherst. She hopes to be a part of stories that challenge stereotypes and spark conversation. Her recent work includes Speakeasy’s BLKS, Artists Theater of Boston’s She Eats Apples, the WAM Theatre/Central Square Theater’s Pipeline and a Daniela Martinez film Shift which was selected for the 2021 Roxbury International Film Festival.

Vincent Ernest Siders is a stage director, equity actor, producer, educator, and consultant. Currently he is the Director and Lead Instructor for the ‘Ambassadors’, the touring division of Youth Underground at Central Square Theater. Vincent has served as Artistic Director for two theater Companies, both in Boston: New African Company and TYG Productions -home of the Family Beef Feast Festival. Vincent has worked as director and theater educator for a number of theaters and institutions of learning including: Huntington Theater, Central Square Theater, Hibernian Hall Boston, Boston Playwrights Theater, Boston University, Emerson College, New African Company, Dance Theater Complex, Upward Bound and Boston Public Schools. As an actor, Vincent has performed throughout the East Coast. Memorable roles include but not limited to: King Shahrayar in “Arabian Nights” and Uncle Diva in “Mr g” both at Central Square Theater; Joe Bell in “Guided Tour” at Hibernian Hall in Roxbury; Tom in “The Glass Menagerie at Lyric Stage; Friar Francis in “Much Ado About Nothing” with Commonwealth Shakespeare Company; Lucius in “Jesus Hopped the A Train” with Company One; Rooftop in “Our Lady of 121st Street” with SpeakEasy Stage Company; and James in “Monticel” at Boston Playwrights’ Theatre, where he played the role of Thomas Jefferson’s unclaimed son. Dubbed ‘a Boston Treasure’ by The Boston Globe, Vincent has received: two IRNE nominations for Best Direction, two IRNE Awards for Acting, the Elliot Norton Award for Best Actor, and Boston Magazine’s Best of Boston Award for best Actor.

Josh Glenn-Kayden (he/him) is a Boston-based director and the Artistic Producer and Casting Director at Company One Theatre. Josh’s work centers around new plays that help us dream our culture forward and imagine ways to create a more just world together. Josh will be directing the world premiere of Shrike by Erin Lerch with Fresh Ink Theatre in January 2022. Recent directing projects include Wild Flowers by Tatiana Isabel Gil (Company One Better Future series), Visionary Futures: Science Fiction Theatre for Social Justice Movements (consisting of new plays by Phaedra Michelle Scott, M Sloth Levine, and Jaymes Sanchez) at UMass Amherst, Baltimore by Kirsten Greenidge (UMass Amherst), workshops of Walden by Amy Berryman and The Interrobangers by M Sloth Levine (UMass Play Lab), Greater Good by Kirsten Greenidge (A.R.T. & Company One world premiere, associate director), the world premiere of This Place/Displaced (Artists’ Theater of Boston, ArtsFuse Best Stage Productions of 2018), the New England premiere of Nicky Silver’s The Lyons (Titanic Theatre), and the world premiere of Laura Neill’s Don’t Give Up the Ship (Fresh Ink Theatre). Josh is also the director and co-producer of The Legion Tapes, a sci-fi podcast written by Erin Lerch. Josh has directed and developed new work for the A.R.T., Company One Theatre, Fresh Ink Theatre, Flat Earth Theatre, Artists’ Theater of Boston, the Museum of Science, UMass Amherst, Hub Theatre, the One Minute Play Festival, and TC Squared Theatre Company, among others. Josh holds a BA in Drama from Tufts University and an MFA in Directing from UMass Amherst. www.joshglennkayden.com

Deborah Kronenberg, Program Consultant & Facilitator
Deborah is currently Lab Faculty and works in Academic Affairs for College Unbound. Previously, she served as Assistant Professor of Theatre and Chair of the Performing Arts Department at Pine Manor College. She earned her Master’s in Educational Theatre from NYU and her MFA in Interdisciplinary Arts from Goddard College. Deborah has spent over 20 years teaching theatre for social change in public schools and communities. She has spent the last five years developing “ensemble culture” which uses applied theatre techniques and philosophies to shift pedagogy in higher education.

In 1999, Stage One, Company One Theatre’s education program, began a summer camp at an independent site in the Boston area. Two years later the summer program was invited to be a resident at the Coolidge Corner Theatre, where the curriculum began to evolve into a more intensive training.  In 2006, Stage One took up its home at the Boston Center for the Arts.

In 2012, Company One Theatre, in collaboration with the City of Boston and the Department of Youth Engagement and Employment, began its Apprentice Program, which works with Boston teens to offer positive, pre-professional work experience. Around the same time, the company introduced its Professional Development for Actors Class, which provides Boston actors with challenging character development, technique, and audition training.

As part of Stage One: In-School, Company One Theatre has established teaching artist residencies within elementary, middle, and high school campuses in the Boston Public School system to introduce foundational elements of performing arts, theatre production, and artistic engagement to Boston’s youth.