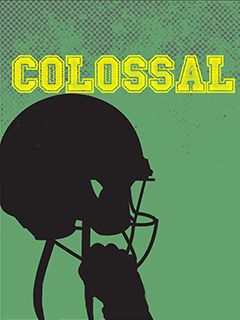 July 17 – August 15, 2015
Roberts Theatre, Calderwood Pavilion
at the Boston Center for the Arts

Contains strong language – recommended for high school age and above.

The lights burn bright. The smell of turf hangs thickly in the air. The crowd erupts in thunderous applause. The beauty and brutality of football seduce Mike to stray from the path his father had mapped out for him, but when a snap decision results in a career-ending injury, Mike must tackle the past and make peace with the man he dreamed he would be. Played in four quarters with a half-time show, dance company, and a drumline, COLOSSAL’s explosive theatrical storytelling and full-contact physicality carries this unmissable summer event all the way to the end zone.

Company One is thrilled to be producing Colossal as part of its National New Play Network rolling world premiere with four other companies across the country. A truly epic play where the athleticism and grace of football collide with the emotion of a heartfelt love story, Colossal is sure to inspire, leaving you cheering in the stands.

Highly entertaining ... Williams and her team march it downfield with Belichick-ian precision, toward a big emotional score at the end.
- The Boston Globe

This is no flowery-tongued, special-effects-laden work. This is football. This is reality. This is raw, human, stumbling, staggering truth.
- HowlRound

Students and teachers! The Education Department at Company One Theatre is pleased to share our Curricular Connections Packet for the NNPN Rolling World Premiere of COLOSSAL, by Andrew Hinderaker. The articles, lesson plans, and discussion questions in this packet are designed for you to explore the world of the production.

INTERVIEW WITH THE PLAYWRIGHT

Playwright Andrew Hinderaker and Dramaturg Ramona Ostrowski discuss the journey and appeal of “this pressure-cooker of a play.

Join us for a sneak peek at C1’s summer show, COLOSSAL by Andrew Hinderaker. We will start the night with an hour of mingling, bites, and booze (cash bar) before we move to an open rehearsal of the show. Guests will have the opportunity to watch the work in the room and chat with the director and cast. CLICK HERE for more information.

Join us after the first Pay-What-You-Want (tickets available at the door. $6 minimum) performance for a conversation with COLOSSAL playwright Andrew Hinderaker and director Summer L. Williams, led by dramaturg Ramona Ostrowski. CLICK HERE for more information.

Company One’s BosTEEN Artist Night is BACK! Join us for a night of activities, conversation and a performance of COLOSSAL by Andrew Hinderaker! Like any other, this BosTEEN Artist Night gives young, civically-engaged artists and community members an opportunity to see the show, discuss the underlying themes in the work, and get creative with each other and the cast at a social featuring free refreshments, entertainment, and interactive artistic activities. This time, Company One Theatre will engage students in physical activities and verbal discussions about accessibility, teamwork and allyship. CLICK HERE for more information.

Join us after the second Pay-What-You-Want Sunday matinee for a special behind-the-scenes peek into the making of COLOSSAL! Our talented designers will be on hand to let you into their process through sketches, renderings, and models and to answer questions. CLICK HERE for more information.

Join ONERush and college students from all over Boston on Friday, July 31st, for Company One Theatre’s Cahllege Mixah Night, a night to hang out with other college students from around the city. This time, catch a performance of the rolling World Premiere of COLOSSAL by Andrew Hinderaker, a play in four quarters with a half-time show, dance company, and a drumline. Then, stick around for our post-game party! CLICK HERE for more information.

Join us for a post-show discussion with dramaturg Ramona Ostrowski and members of the incredible community cohort who helped us put this show together: Noe Montez from Tufts University, Sidney Monroe from The Theatre Offensive, and Adrian Hernandez from Boston College High School. The conversation will focus on the themes of the play, giving you insight into both the story and production process! CLICK HERE for more information.

Stick around after the show for a discussion with the cast of COLOSSAL! CLICK HERE for more information.