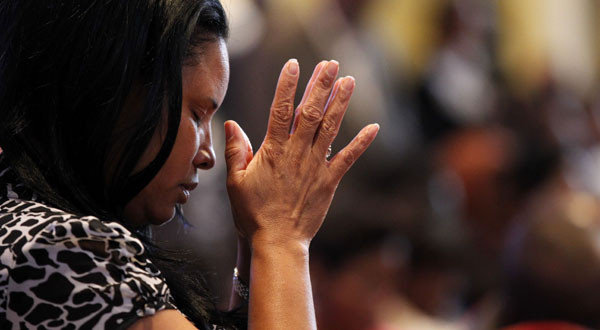 A congreagation member prays as Rev. Fred Luter, pastor of the Franklin Ave. Baptist Church, delivers a sermon during Sunday Services at the Church in New Orleans, Sunday, June 3, 2012. The new face of a Christian denomination that formed on the wrong side of slavery before the Civil War could be an African-American preacher who grew up in New Orleans Lower 9th Ward. The Southern Baptist Convention holds its annual meeting in New Orleans next week and it could see the election of Luter as president. Faced with growing diversity in America and declining membership in its churches, the denomination is making a sincere effort to distance itself from its troubled racial past. (AP Photo/Gerald Herbert)