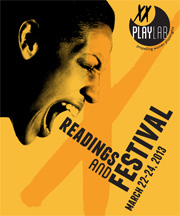 Free and open to the public!
Friend us on Facebook for ongoing updates.

XX PlayLab, a program jointly presented by the BCA and Company One, a BCA Resident Theatre Company, supports, develops and propels the work of female playwrights. This season, the BCA and Company One invited three dynamic women at various stages of their careers for a year-long program composed of in-house and public readings, dramaturgical support and artist mentorship, culminating in a weekend long festival in March. Join us for three unique works by local Boston writers Natalia Naman, Kirsten Greenidge and Lydia R. Diamond, that represent a vibrant picture of our region's new play sector, accompanied by panel discussions featuring leading thinkers and practitioners on race and gender in the American theatre.


In a whirlwind of crackling dialogue and tricky questions, an actor, a doctor and a pair of academics navigate the complexities of race, class, friendship and the human brain.

The XX Playwright in Boston - Saturday, March 23 at 10am


After a hundred years, the foundation of this old Georgian church is crumbling, inside and out. As the community prepares for what may be their final service, their faith is tested - is it too much to pray for a revival?


With her bank account on empty, itching for more than her small town can provide, Nicole confronts both the unfulfilled promises of her youth and the ramifications of how she and her friends treated the only black girl in their graduating class.

Where We Stand: Gender and Race in the New Play Sector - Sunday, March 24 at 12pm


The Old Ship of Zion


Splendor Lit Beneath Their Bones

Check out these contextual images from each of our three XX plays. We think they provide the feeling of each work, and are excerpted from the research the festival dramaturgs have done as part of the plays’ development processes.

SPLENDOR LIT BENEATH THEIR BONES
by Kirsten Greenidge THE OLD SHIP OF ZION
by Natalia Naman Get to know the 2013 XX artistic teams through this series of interviews and profiles by D.C. Playwright & Activist Jacqueline Lawton.