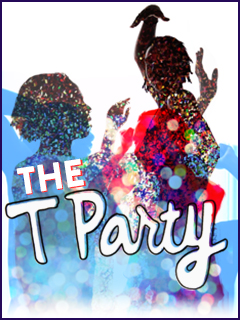 The party to redefine all parties is coming to Boston — and you’re invited. Shake things up. Bend the rules. Break the binary. Through an exhilarating series of scenes that blur the line between audience and actors, real stories and fantastical satire, THE T PARTY casts an exuberant, kinky, and surprisingly tender look at gender expression and sexuality. This wild mash-up of a performance will sweep you off your feet and take you for a ride. The only house rule? Leave your expectations at the door.

"Bracingly original and head-spinning ... “The T Party’’ is infused with an embracing warmth that insists on the right of all people not just to live, but to live happily." — The Boston Globe

"Excellent ... Company One has come up with an ace, versatile and multicultural ensemble." - WBUR's The ARTery

We are thrilled to be collaborating again with Natsu Onoda Power, an artist of enormous vision and heart. Her new play, THE T PARTY, is an exuberant, playful look at gender expression in America. This summer, come party with Company One Theatre as we celebrate community, love, and acceptance.

Closing the Gap: A Conversation on Intergenerational LGBTQ History

Join the Massachusetts Institute for Psychoanalysis’ John Rosario-Perez and cast members of THE T PARTY for an engaging, intergenerational panel on the history of the gay rights movement, from the Stonewall riot to present-day challenges and triumphs.

The celebration isn’t over after The T Party! You’re invited to a spoken word open mic event sponsored by Company One’s ONERush, happening immediately after the August 6th performance and open to all college students. Come share your own story or just sit back and listen to the skills of our featured artists as they share their own experiences of gender and sexual identity expression – spoken word style. Participate by providing support and enjoying complimentary refreshments, or get up there and share your own story! Student tickets only $15 – get yours now!

Join the Party: An Interactive Experience

Curious about everything that goes into bringing a performance to life? Enter THE T PARTY set after the performance to check out specific design elements from the show, and learn more about how they were created.

Gender Play After Party with The Theatre Offensive

Ain’t no party like a C1 party, cause a C1 party don’t stop! Join us after the performance to dance, eat, laugh, play, and have your expectations challenged with members of The Theatre Offensive family, the cast of THE T PARTY, and your fellow show attendees.

July 21, 2016
We Party On: You’d be a fool to miss it by Christopher Ehlers, DigBoston
July 19, 2016
At This 'T Party,' All Genders Are Welcome by Carolyn Clay, WBUR's The ARTery
July 17, 2016
In Company One’s ‘The T Party,’ the transgender experience unfolds, in shadow and light by Don Aucoin, The Boston Globe
July 20, 2016
Company One’s ‘T Party’ Educates and Entertains (4 Stars) by Mike Hoban, Boston Events Insider
July 18, 2016
A theatrical mélange about issues of concern to the transgender population begins at a high school prom by Iris Fanger, Theatermania