Edith Can Shoot Things And Hit Them 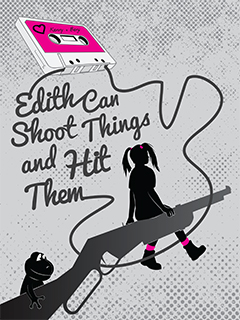 Celebrating the plays of A. Rey Pamatmat with the Huntington Theatre Company

A New England Premiere by A. Rey Pamatmat
Directed by Shawn LaCount

With no parents, little food, and nothing in the bank account, 12-year-old Edith, her brother Kenny, and a giant stuffed frog are doing just fine, thank you very much. Making the rules up as they go, Kenny gets more than mix-tapes from his new friend, Benji, and Edith ends up shooting something for real. Funny and full of heart, this coming of age story explores the gap between childhood and whatever comes next.

A. Rey Pamatmat has written a fabulous play full of heart, humor, and what it means to be grown up.  We’re so happy to be collaborating with the Huntington Theatre in order to premiere two of Pamatmat’s works in Boston this spring and to introduce audiences to such an exciting, unique theatrical voice. Students and teachers! The Education Department at Company One Theatre is pleased to share our Curricular Connections Packet for the New England Premiere of EDITH CAN SHOOT THINGS AND HIT THEM by A. Rey Pamatmat.  The articles, lesson plans, discussion questions, and resources in this packet are designed for you to explore the world of the production.

A night of activities and interactions for high school students from around Boston! Click here for more information.

Spend as little as $6 to see a matinee performance of EDITH CAN SHOOT THINGS AND HIT THEM and stick around for a rousing post-show with Ma-Yi Writers Lab, the largest resident company of Asian-American playwrights. Co-hosted by the Huntington, the conversation will be moderated by Mike Lew, co-director of the Ma-Yi Writers Lab! Join Company One Theatre and Boston Community Activist Hung Nguyen for a night of identity discussion and delicious eats, followed by a performance of EDITH… Click here for more information!

A Pay-What-You-Want ($6 minimum) performance followed by a post-show discussion with the actors and design team, where they’ll discuss their inspirations behind their designs for EDITH CAN SHOOT THINGS AND HIT.

A night of networking for college students to interact beyond campus. Click here for more information!