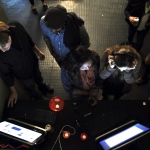 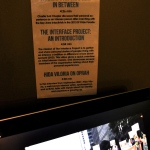 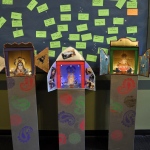 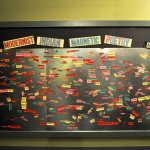 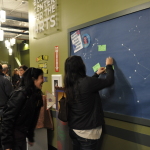 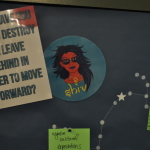 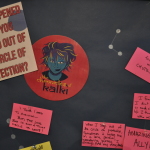 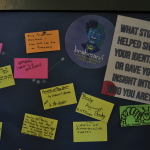 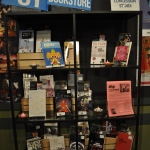 Since ASTRO BOY AND THE GOD OF COMICS is such a dynamic show, we wanted to make sure the lobby captured the spirit of fun and play. A section of wall in the lobby became a chalkboard, where audience members could learn to draw Astro Boy’s face, and fill in cartoon panels to complete a story. Across from that, a bulletin board asked them to write and share what they thought of the show, to design their own helpful robot, or to imagine and draw the future of interactions between humans and robots. A motif in WE ARE PROUD TO PRESENT… is the trees in the desert in Namibia. Inspired by this, dramaturg Ramona Ostrowski created two trees out of wire and placed them on tables in the lobby. Audience members were prompted to “write us a letter”—a reference to the frequent letters in the text—on notecards, sharing their questions, reactions, and feelings about the play. They then attached these cards to the trees.