We Are Proud to Present a Presentation 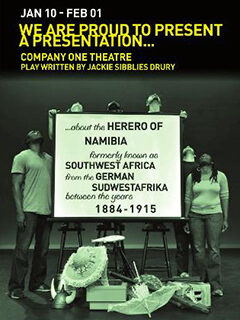 We Are Proud to Present a Presentation is about the Herero of Namibia, Formerly Known as Southwest Africa, from the German Sudwestafrika, Between the Years 1884-1915

The personal and political, humorous and harrowing collide in this exhilaratingly irreverent play from Boston's own Company One. A rehearsal room descends from collaborative to absurd as a group of idealistic actors attempt to dramatize the little-known first genocide of the 20th century. But as the ensemble wrestles with this remote story, tensions mount, and their exploration hits much closer to home than anybody expected. One of The New York Times top ten plays of 2012, We Are Proud to Present a Presentation... is an innovative, fast-paced and uncomfortably funny take on race, empathy and the devastating consequences of our best intentions.

Jackie Sibblies Drury’s experiential new play is hilarious and deeply resonant in both our local and national communities. This production marks our first collaboration with ArtsEmerson – one of Boston’s most exciting cultural institutions. WE ARE PROUD…, directed by our own Summer L. Williams (NEIGHBORS), will be unlike anything you’ve experienced at Company One, and is certain to cause a ruckus.