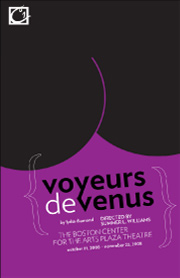 Company One is proud to present the Boston premiere of Lydia Diamond's dazzling new play VOYEURS DE VENUS. Sara is an African-American scholar of pop culture trying to write a book about Saartjie Baartman, better known as the 19th-century sideshow sensation The Hottentot Venus. As the two women's worlds collide, Sara faces a struggle: can she reveal the truth about Saartjie and still write a bestseller? While Sara navigates a treacherous course involving her white husband and her black lover — who is also her publisher, she is forced to confront her own racial identity. Sexy, bold and dangerous, VOYEURS DE VENUS is sure to be one of the season's most piercing dramas.

It is a tough, challenging, complicated piece of work. It is also an essential one. And in Company One's production . . . directed with acuity and grace by Summer L. Williams, it is receiving the staging it deserves. At times frightening, at times moving, and at times startlingly funny, this "Voyeurs de Venus" is never less than riveting to watch.
- The Boston Globe