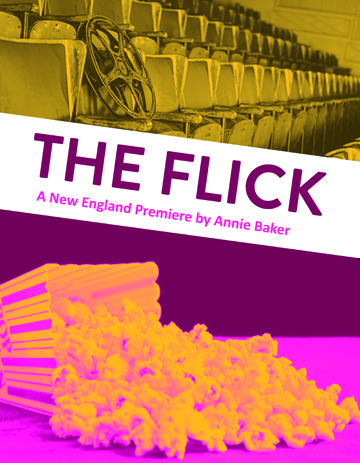 Presented with Suffolk University
at the Modern Theatre

Welcome to a run-down movie theatre in Worcester County, MA, where Sam, Avery and Rose are navigating lives as sticky as the soda under the seats. The movies on the big screen are no match for the tiny battles and not-so-tiny heartbreaks that play out in the empty aisles. Annie Baker (THE ALIENS) and Artistic Director Shawn LaCount reunite with this hilarious and heart-rending cry for authenticity in a fast-changing world.

With this production, the artists of C1 answer the call from New England fans of one of America’s most celebrated contemporary playwrights. Boston’s relationship with Annie Baker began with the C1 award-winning production of THE ALIENS as part of the Shirley, VT Plays Festival. Annie Baker (who grew up in Amherst, Massachusetts) recently won both an OBIE for playwriting, and the Susan Smith Blackburn Prize for THE FLICK. This is a play about an indie movie house turning digital right here in Massachusetts, and one of the characters is a Clark University student, where C1 was founded.

Annie Baker, one of the freshest and most talented to emerge Off Broadway in the past decade, writes with tenderness and keen insight. Her writing is a great blessing to performers. The Flick draws out nakedly truthful and unadorned acting. This lovingly observed play will sink deep into your consciousness.
- New York Times