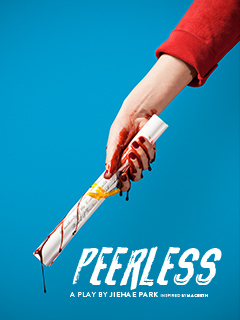 A Boston Premiere by Jiehae Park
Directed by Steven Bogart

Presented in collaboration with the Boston Public Library in conjunction with the Library’s “All the City’s a Stage: A Season of Shakespeare”

Twin high school seniors L and M are dead-set on attending not just an Ivy League school, but the Ivy League school. With their perfect SAT scores, perfect hair, and “perfect” minority status, they think acceptance should be guaranteed. When a rival student emerges with a personal tragedy to make an admissions officer weep, however, the twins will do anything to knock out the competition. Does that include murder most foul? Mean Girls meets Macbeth in this dark comedy, which sets one of Shakespeare's bloodiest plays against the backdrop of competitive college admissions.

Radically inclusive, totally affordable. All tickets for peerless are Pay-What-You-Want, with a suggested $10 donation, no minimum required. though a your ticket donation goes to Company One and directly contributes to the future of financially accessible theater in Boston.

“To stage the first-ever live theatre run at the BPL is an honor. And it marks what we hope will be an example to the rest of Boston’s artistic and cultural institutions of what we can achieve together as an intersectional community.”

From the collaborators: “Today’s library spaces can be brought to life with innovative partnerships. In our first year post-renovation, this pilot program with Company One’s Theatre performances will undoubtedly bring new energy and dynamism to the Central Library for all to enjoy,” said David Leonard, President of the Boston Public Library. “It’s yet another way of making Shakespeare come to life.”

"...the play works on multiple levels: as ink-dark comedy; as an ingenious, spookily atmospheric psychological drama; and as a chilling parable about the soul-warping price of extreme ambition.
- The Boston Globe

A bright, loud, colorful and caustic comedy
- The Hartford Courant

Want to extend your #ConspireWithC1 experience? Join us after any Saturday matinee performance for an in-depth look at the themes of the play and a discussion about the artistic process!

Saturday May 13th | PEERLESS From All Vantage Points
Stick around after the 2pm show for a panel discussion on all things peerless! Hear perspectives on the play from a wide variety of experts, including: Shakespeare-enthusiast Erika Boeckeler from Northeastern University, Sharon Greenfield from the Massachusetts Institute for Psychoanalysis, Amee Naik from Breakthrough Greater Boston, Sheila Lee from ASPIRE, and Chris Hahm from AWARE.

Saturday May 20th | Teens Tackle Teen Stress: A Panel With Boston GLOW
Join us in conversation with Boston GLOW teens as they unpack peerless and talk through the pressures facing high school students today. They’ve got some tried-and-true ways to manage stress they want to share with you!

Saturday May 27th | The Art of College Admissions
Applying to colleges soon and wondering what the process will be like? Hear from our friends at Hyde Square Task Force about the college application and admissions process! Get the inside scoop from mentors and mentees, and learn some tips and tricks along the way.

Take a look at the C1 Apprentices’ guide to peerless, complete with additional resources for high school students. Click here to read more!

Want a peek into the rehearsal room? Click here to check out our dramaturgy blog for insight into the play and production process. Don’t see what you’re looking for? Ask a dramaturg!

May 22, 2017
‘Peerless’ Turns a Library Into a Theatre by American Theatre Editors, American Theatre Magazine
May 20, 2017
In 'Peerless,' All Foul Is Fair In The World Of College Admissions by Callie Crossley, WGBH's Under The Radar
May 3, 2017
In ‘Peerless,’ the college try means toil and trouble by Don Aucoin, The Boston Globe
May 2, 2017
'peerless' Reimagines Macbeth As A Tale Of Asian-American Teens Fighting For College Admission by Carolyn Clay, WBUR's The ARTery
April 26, 2017
Plotting their future, and then something much worse by Christopher Wallenberg, The Boston Globe
April 27, 2017
COVER STORY - WHAT’S FAIR IS FOUL: ‘PEERLESS’ AT COMPANY ONE by Christopher Ehlers, DigBoston
April 23, 2017
Jiehae Park’s ‘peerless’ comes to the Boston Public Library by Gordon Donnelly, Metro Boston