No Room For Wishing 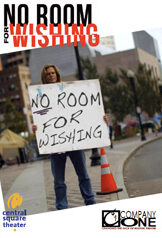 Compiled from interviews and live recordings during the occupation of Dewey Square in Fall 2011, NO ROOM FOR WISHING follows Occupy Boston from its formation, through clashes with the police, infighting among the activists, legal battles and collective victories, to its eviction by the City of Boston.

One of Boston’s most dynamic young theater makers portrays dozens of real-life characters in this fiercely immediate, up-close-and-personal encounter with our city, our nation, and ourselves.