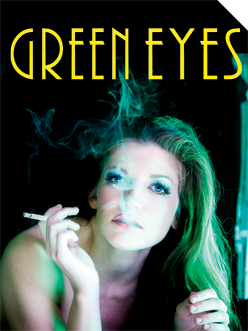 A Boston Premiere by Tennessee Williams
Directed by Travis Chamberlain
Produced in Collaboration with Chris Keegan and The Kindness
January 18 – February 12, 2012
The Ames Hotel

A Boston premiere at Boston’s premiere boutique hotel! Straight from its sold-out run in New York City, Company One is proud to present Travis Chamberlain’s highly acclaimed site-specific production of Tennessee Williams’ GREEN EYES at The Ames Hotel. Written in 1970 but unpublished for almost 40 years, this “lost” erotic thriller graphically reveals the impact of war through the sexual fantasies of a newlywed couple honeymooning in New Orleans. He’s a soldier, traumatized by his participation in the war; she's a ravenous woman determined to satisfy the darkest recesses of her most deviant desires. Starring the acclaimed NYC actress Erin Markey - “a kittenish vixen whose sexual pliancy hides an iron will” (The New York Times) - GREEN EYES transforms a honeymoon suite into a psychosexual battleground where desire and violence blur and become indistinguishable. With only 25 seats available per show, this is an exclusive theatrical event you do not want to miss!

A PITCH-PERFECT TRIUMPH! Leaves you pondering long after the curtain
- Backstage

ONLY 25 TICKETS
AVAILABLE PER SHOW!

Learn more about the world of the play on the GREEN EYES blog:

Check out the GREEN EYES program: