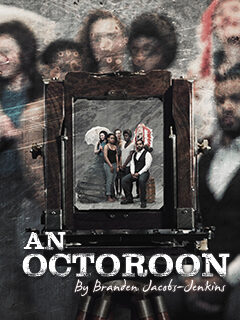 There's trouble at the plantation: No one is falling in love with who they should be, someone has been murdered, and, unless the mail comes soon, all hope is lost! Branden Jacobs-Jenkins (author of Neighbors, Appropriate) radically revises a 19th century melodrama — complete with blushing Southern belles, dastardly schemes, and budding forbidden romances — for today's "post-racial," spectacle-obsessed world. Winner of the 2014 Obie Award for Best New American Play, An Octoroon is an incendiary, subversively funny exploration of identity, jammed with sensation and surprises!

“Ingenious… If you see “An Octoroon,’’ you’re likely to find that it stays with you.” - The Boston Globe

“Hilarious and harrowing... This decade's most eloquent theatrical statement on race in America today.” — The New York Times

We are honored to produce this mega-hit direct from its sold out New York production. Reuniting director Summer L. Williams and playwright Branden Jacobs-Jenkins, who previously collaborated on the explosive NEIGHBORS,  AN OCTOROON is a wildly comedic and clever look at race in America from the 1800s to present that asks how far we’ve truly come.

“AN OCTOROON confirms that we’re on very shaky ground whenever we attempt to tell stories about the history of race in America, and as two theater companies who recognize the reality of that shaky ground, we’re committed to presenting challenging theater that can deepen our understanding and further our conversations of race in the city of Boston.” — Polly Carl, ArtsEmerson’s Creative Director

Following the Sunday, February 14th performance: Dramaturg Ramona Ostrowski and guests Lynne Layton from the Massachusetts Institute for Psychoanalysis and Professor Sunil Swaroop of Emerson College will explore the ways that depictions of race and nationality can inform American perceptions of identity and belonging.