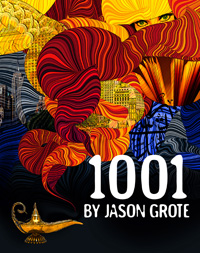 Written by Jason Grote
Directed by Megan Sandberg-Zakian
July 15 – August 13, 2011
The Plaza Theatre @ The Boston Center for the Arts

A seductive fever-dream of a play, Grote’s kaleidoscopic reinvention of the “Arabian Nights” proves to be a timely tale as America reflects on the 10 year anniversary of 9/11. 1001’s rich fantasia conjures a storybook world that dissolves, at a moment’s notice, into an apocalyptic, 21st-century landscape. Stories like “Sinbad the Sailor” and “Aladdin and His Magic Lamp” come to life, making 1001 an explosive, brilliant work about America, the power of story, and identity.

Dynamic, intellectually agile 1001, a postmodern epic about the cultural narratives that shape our lives.
- Time Out New York


THE BOSTON CENTER
FOR THE ARTS