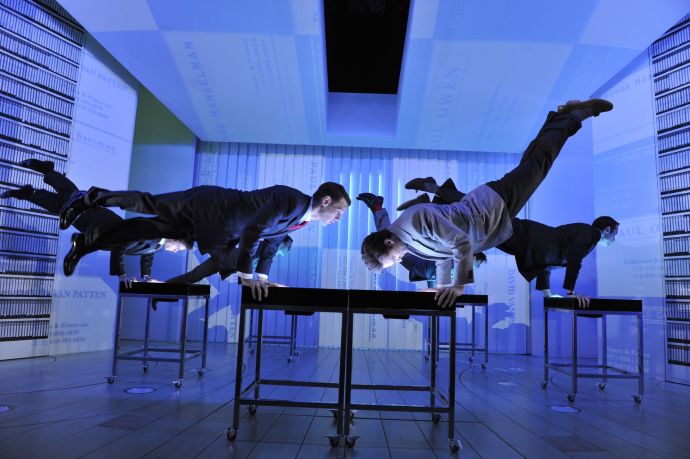 Devlin’s set for the musical “American Psycho” at the Almeida Theatre, in London. The production is transferring to Broadway. Courtesy Robbie Jack / Corbis

Set designer Es Devlin and her work is featured in The New Yorker this week:

In theatre terms, this is the age of Es Devlin. She is theatre’s postmodern expert, and has an instinctive sense of how Shakespeare and opera and fashion and pop concerts might draw from the same dark web of psychological information. Each of her designs is an attack on the notion that a set is merely scenery. She is in demand because she can enter the psychic ether of each production and make it glow with significance. She told me, “A stage setting is not a background, it is an environment”—something that directors and actors can respond to. “Sometimes what these people want is a liberator, someone who might encourage them to defy gravity.”

Vox reports on the recent controversy about Hamilton‘s casting notice:

As it has everywhere else, diversity has become a flashpoint conversation on Broadway over the past few years. And Hamilton‘s approach to its subject matter — using a blatantly diverse cast to reclaim historical narratives traditionally populated by white actors — has become so iconic that these days on Broadway, “Hamilton casting” is a commonly discussed production strategy. The casting notice recently posted to the show’s website (and later edited) originally explicitly sought nonwhite actors to audition for the lead roles, a way of subverting theater’s typical white-as-default casting bias.