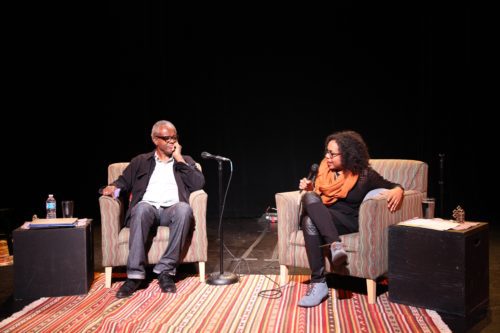 Jones and DeGroat: “What’s RACE got to do with it?” Photo: Peter Irby

Oregon Artswatch reports on a conversation about race and the arts held at Imago Theatre earlier this month:

The event was a conversation called “What’s RACE Got To Do With It?,” produced by the group The Color of NOW and hosted by Third Rail Repertory Theatre, which shares the Imago space. Part performance, part talk show and part back-and-forth with the audience, it included a monologue to an unborn child – a child who, given the state of the world and its racial volatility, would remain unborn, an idea derailed – by actor Joseph Gibson, and a little music from Ben Graves, and a long conversation about the nitty gritty of race in America and Oregon in particular with the actor, director, and activist Kevin Jones, artistic director of the August Wilson Red Door Project, an organization whose ambitious goal is to “change the racial ecology of Portland through the arts.” It’s a tall order, given the ratcheting of racial tensions across the nation and much of the rest of the world in recent times.

Boston Globe has a feature about the city’s redevelopment efforts and how the arts are included in those plans:

First came Boston Creates, now comes Futurecity Massachusetts, a joint project of the Massachusetts Cultural Council and the Boston Foundation that seeks to place arts and culture at the heart of redevelopment and revitalization efforts in the state’s three largest cities. The partnership, which is working with consultant Mark Davy’s London-based Futurecity, will focus on real estate projects in Boston’s Fenway Cultural District, the Springfield Central Cultural District, and Worcester’s Salisbury Cultural District.