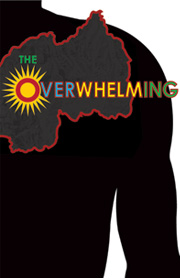 Written by J. T. Rogers
Directed by Shawn LaCount
October 30 – November 21, 2009
The Plaza Theatre @ The Boston Center for the Arts

Company One presents the Boston premiere of THE OVERWHELMING, an exotic thriller from award-winning playwright J.T. Rogers (Madagascar, White People). Seizing the opportunity to do research for his new book, Jack Exley uproots his family and moves to Rwanda in early 1994. As Jack, his wife and his teenage son encounter foreign culture and eye opening politics, they each find their own brand of trouble. Realizing that in this place no one is exactly what they seem, his family begins to unearth unexpected truths about this tiny, troubled nation... and about themselves.

Stop the presses! There’s finally a play in town that makes thinking a pleasure again.
- Variety

J.T. Rogers, playwright of THE OVERWHELMING, will be joining us for our post-show talkback on Friday, November 13th!  He’ll also be signing copies of his script that will be for sale in the lobby. If you can’t join us on the 13th, pre-order your signed copy today by emailing info@companyone.org.