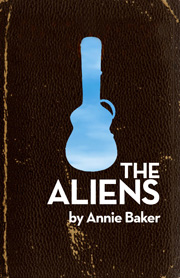 In the town of Shirley, two 30-something dropouts hang out by the dumpster behind the coffee shop where they meditate on music, philosophy, shrooms, and Bukowski. When a teenage employee asks them to relocate, these disillusioned young men find the disciple they’ve been waiting for. A beat-tinged, psychotropic journey, Annie Baker’s The Aliens is a funny and heartening look at friendship, ritual, and small town New England. Company One is proud to join the Huntington Theatre Company and SpeakEasy Stage Company in exploring the tiny spaces of our small towns.

Baker’s play will have you laughing one moment and tearing up the next..
- The Boston Herald