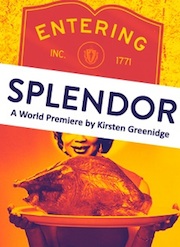 A World Premiere by Kirsten Greenidge
Directed by Shawn LaCount
Dramaturgy by Ilana M. Brownstein
October 18 – November 16, 2013
The Plaza Theatre @ The Boston Center for the Arts

On Thanksgiving eve in a town just north of Boston, Fran is determined to make a nice turkey dinner for her chain-smoking klepto mother, and her couch-surfing older brother. If only it were that simple. A vivid collage of local stories exposes a community where generations of families collide over far more than pumpkin pie and stuffing. Straight off her smash-hit THE LUCK OF THE IRISH, local luminary and OBIE Award-winning playwright Kirsten Greenidge orchestrates 45 years of our history into evolving snapshots of race, class, dreams, and the place we call HOME. An outgrowth of Greenidge’s short play “Thanksgiving” (part of GRIMM, 2010), SPLENDOR was developed as part of the 2012-13 XX PlayLab.

We could not be more excited to continue our partnership with Kirsten Greenidge, and to be presenting her first new play in Boston since THE LUCK OF THE IRISH. Kirsten has been in residence with us since 2005, and in that time has won local and national awards for playwriting,  and has been produced at Lincoln Center, LaJolla Playhouse, and the Huntington Theatre. SPLENDOR has been four years in the making under the guidance of C1’s Artistic Director Shawn LaCount, and was workshopped during last year’s XX PlayLab Festival – a collaborative program with the Boston Center for the Arts, the mission of which is to develop and produce works by women. We are thrilled to see this long term collaboration between producer, playwright, and director culminate in this world premiere production.

"An ambitious take on race, class and gender...probes people like us”
- The Boston Globe

The talent of cast...signals good things ahead for Boston theater community"
- WBUR

For other Group Sale questions
or requests, please contact
Summer L. Williams at