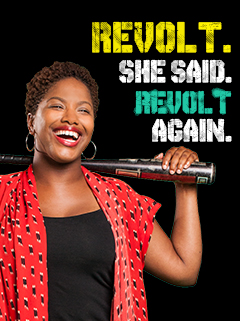 A New England Premiere by Alice Birch
From the Director of AN OCTOROON, Summer L. Williams

Want to extend your #RevoltWithC1 experience? There will be post-show programming following every Thursday evening performance.

REVOLT. SHE SAID. REVOLT AGAIN. morphs language and explodes boundaries to explore the myriad ways women are styled, shaped, and confined to fit society’s expectations, asking us: What happens when we rebel?

Combining sharp humor and raw emotion in vignettes that swing wildly between the real, the surreal and the self-aware, REVOLT is as multifaceted and untamable as the subject matter it celebrates. Stylishly tackling workplace power dynamics, sexual politics, and societal expectations, REVOLT sinks in, takes hold, and is impossible to forget.

A cluster-bomb of subversion.
- The Telegraph

>>Want to extend your #RevoltWithC1 experience? There will be post-show programming following every Thursday evening performance. Click here for the full schedule.

>> Check out the Production Blog to keep up with our artistic team during rehearsals and tech week!

>> Watch the official #RevoltWithC1 trailer for a taste…

October 23, 2016
"Original, trenchant, and scorching ... ‘Revolt.’ delivers a strong feminist message" by Don Aucoin, The Boston Globe
October 25, 2016
Time To 'Revolt'? Yes, Says Company One, And 'Revolt Again.' by Carolyn Clay, WBUR's The ARTery
September 1, 2016
Fall Theatre Preview: "another boundary-breaking performance" by Michael Hagerty, WBUR's The ARTery
August 4, 2016
The best shows on Broadway and beyond in 2016 (so far) by David Cote, Time Out