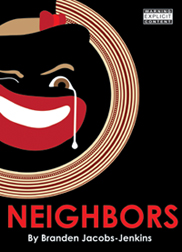 Written by Branden Jacobs-Jenkins
Directed by Summer L. Williams
January 14 – February 5, 2011
The Plaza Theatre @ The Boston Center for the Arts

The most controversial and brilliant play of the season.

Have you seen the new neighbors? Richard Patterson is not happy. The family of black actors that has moved in next door is rowdy, tacky, shameless, and uncouth. And they are not just invading his neighborhood—they’re infiltrating his family, his sanity, and his entirely post-racial lifestyle. This wildly theatrical, explosive play on race marks the major debut of Branden Jacobs-Jenkins, member of NYC’s Public Theatre’s Emerging Writers Group.

NEIGHBORS includes explicit language and sexual content and is inappropriate for children.

COMPANY ONE'S excellent Boston premiere production of NEIGHBORS by Branden Jacobs-Jenkins is a real slap upside the head...Go. I dare you.
- Joyce Kulhawik

It's smart, funny, shocking, discomfiting, and extremely entertaining. It seems to me that's what theatre should be
- BroadwayWorld.com