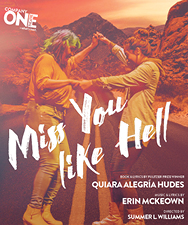 book & lyrics by Quiara Alegría Hudes
(In the Heights, Water by the Spoonful)
music & lyrics by Erin McKeown
directed by Summer L. Williams
co-produced with American Repertory Theater as part of the A.R.T. Breakout series

16-year-old Olivia hasn’t seen her mother Beatriz in years, but—surprise!—mom just showed up in the middle of the night, with a pickup truck, the promise of the open road . . . and an immigration hearing looming at journey’s end.

C1 returns to OBERON with a powerful new musical odyssey about a daughter who gets to stay, a mother who might have to leave, and the border wall that could come between them. Quiara Alegría Hudes and Erin McKeown’s Miss You Like Hell explores how many miles we can travel with the help of courageous neighbors and beautiful strangers.

“A fresh take on the American road story, filled with people and ideas we rarely get to see onstage.” - The New York Times

Company One is producting MISS YOU LIKE HELL to amplify:

– The necessary redefining of “American” to be more inclusive and unbound by borders.

– Kindness and hospitality as powerful tools in paving the way for a more just society.

– The hard work of grassroots organizations that fight for immigrant justice both in Boston and beyond.

– We affirm the declaration of our playwright Quiara Alegría Hudes, who says that no matter how “othered” her characters may appear in the traditionally wealthy white spaces of theatre, they categorically belong on our collective stages.