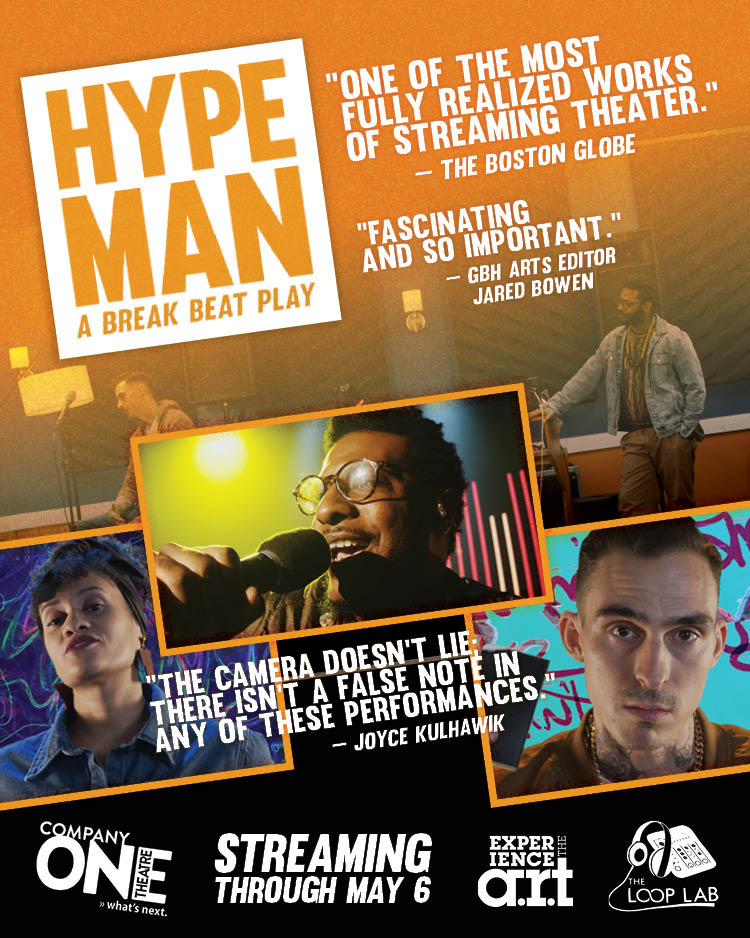 Called “Sharply directed, incredibly well-acted, and absolutely of-the-moment” by GBH Executive Arts Editor Jared Bowen, Company One’s Hype Man: a break beat play asks: who has the responsibility to speak up in the face of social injustice? This newly reimagined version of the Elliot Norton Award-winning play by poet and playwright Idris Goodwin (How We Got On) follows a rapper, a beat-maker, and a hype man on the verge of making it big when the police shooting of an unarmed black teenager shakes the interracial hip-hop trio to the core and forces them to navigate issues of friendship, race, and protest.

Hype Man: a break beat play was developed by Goodwin with Company One Theatre.

"One of the most fully realized works of streaming theater."
- The Boston Globe

"The camera doesn't lie' there isn't a false note in any of these performances."
- Joyce Kulhawik

"Company One’s [Hype Man], presented by the A.R.T., is freshly urgent, considering the past year’s debates around policing and the appropriation of historically Black art forms."
- The New York Times

Virtual Premiere Celebration
Join us on April 8 at 7PM ET to celebrate the virtual premiere of Hype Man! Interact with fellow audience members and the creative team, and hear from A.R.T. and C1 staff about our longstanding partnership. Patrons with tickets to any performance are welcome to join. Invitation to RSVP issued following purchase.

Cast Meet-and-Greet
Kadahj Bennett, Rachel Cognata, and Michael Knowlton will join audiences on April 11 at 5:30PM ET for a post-show conversation following the matinee of Hype Man. Patrons with tickets to any performance are welcome to join. Invitation to RSVP issued following purchase.