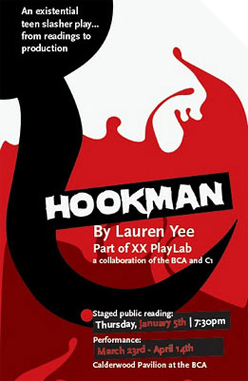 Being a freshman in college is hard when your roommate is weird, home is far away, and Hookman is everywhere! What's Lexi to do when her old high school friend, Jess, gets killed...I mean - has an accident, a car accident, I think? Not even Facebook stalking the dead can calm the creepy feelings spilling out of the shadows in this existential comic horror slasher - a new play by Lauren Yee.

Yee is a talented young writer [whose] voice is absolutely worth a listen!
- nytheatre.com