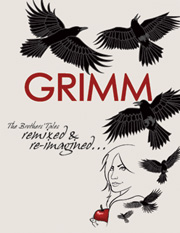 The most exciting theatrical event of the season! GRIMM is a brand-new collection of short plays by Boston’s most celebrated playwrights inspired by their favorite Grimm’s fairytales. Looking for a sweet, soothing tale to carry you away toward dreamland? Look somewhere else. These stories, originally by the Brothers Grimm, have been remixed, re-imagined and given a fresh Boston twist! Featuring new work by Melinda Lopez (SONIA FLEW), Lydia R. Diamond (STICK FLY, VOYEURS DE VENUS), Kirsten Greenidge (THE LUCK OF THE IRISH), Marcus Gardley (DANCE OF THE HOLY GHOSTS), John Kuntz (SALT GIRL), John ADEkoje (6 ROUNDS/6 LESSONS) and Gregory Maguire (WICKED)!

Delicious, seductive and surprising. You do not want to miss this sensational world-premiere!

a fanciful and entertaining flight of imagination
- The Boston Globe

envelope-pushing as ever...
- The Boston Globe

Company One's lively new stage adaptation of some of the tales by the Brothers Grimm, are as different as the battery of seven Boston-area playwrights who mobilized their talents for this ambitious undertaking
- The Boston Globe

The fairy tales they tackle are deep and perplexing, full of lust and danger--perfect fodder for contemporary reinvention.
- EDGE Boston

it’s a glossy, funny revisitation of a popular literary means for sorting through life’s terrors--warts, evil step-mothers, and all.
- EDGE Boston