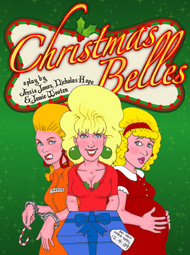 It's Christmas-time in the small town of Fayro, Texas, and the infamous Futrelle Sisters Frankie, Twink and Honey Raye are not exactly in a festive mood. A cranky Frankie is weeks overdue with her second set of twins. Twink, recently jilted and bitter about it, is in jail for inadvertently burning down half the town. And hot-flash-suffering Honey Raye is desperately trying to keep the Tabernacle of the Lamb's Christmas Program from spiraling into chaos. If y'all bring the eggnog, we'll provide all the belly-laughs! Ho-ho!

This hilarious comedy has been making audiences all over the country merry and bright!
- The Malibu Times, CA

December 10, 2009
Tackiness is a gift in fun ‘Christmas Belles’ by Don Aucoin, The Boston Globe
December 31, 1969
"CHRISTMAS BELLES" by Carl A. Rossi, The Theatre Mirror