Astro Boy and The God of Comics 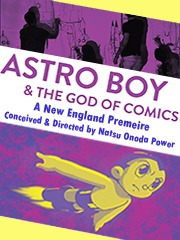 A New England Premiere
Conceived and Directed by Natsu Onoda Power
July 18, 2014 – August 16, 2014
The Plaza Theatre @ The Boston Center for the Arts

Lauded for its technical and artistic genius, ASTRO BOY AND THE GOD OF COMICS serves up live animation, interactive video, and a 1960s dream of the future. Astro Boy – a crime-fighting, sweet-faced robot – and his creator, Osamu Tezuka – the real-life Father of Manga and “Walt Disney of Japan” – explore the intersections of science, art, and family. Director and Playwright Natsu Onoda Power’s high-octane, convention-breaking ASTRO BOY was called “one of the Top 3 Best Theater Experiences in 2012” by The Washington Post.

This sensational, multimedia, experimental theatre piece, devised with an ensemble cast, combines live hand drawing, interactive video, and large-format animation by actors on stage. A major step in the imaginative use of technology in theatre; ASTRO BOY is a truly ground breaking work.

“A feat of exhilarating imagineering, the performance piece heralded the emergence of director/writer/technical whiz Natsu Onoda Power as a captivating force in Washington theater. Almost as much ingenuity was apparent in this 70-minute exploration of the work and life of ‘Astro Boy’s’ visionary animator Osamu Tezuka as is displayed in the design of a Mars rover. Having actors sketch onstage, as others interacted with animated movies and 3-D cartoon figures, transformed the theater from a Studio in name only to one where experimental breakthroughs truly can happen.”
- Washington Post