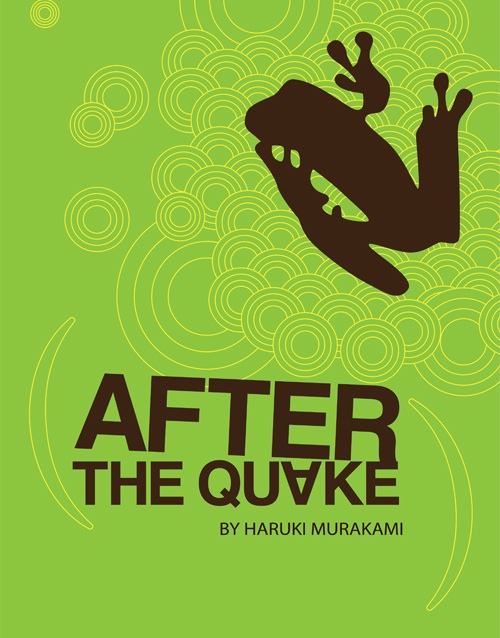 Written by Haruki Murakami
Adapted by Frank Galati
Directed by Shawn LaCount
July 17 – August 15, 2009
The Plaza Theatre @ The Boston Center for the Arts

Writer Haruki Murakami, author of The Wind-Up Bird Chronicle and Kafka on the Shore, is one of the most acclaimed writers of our time, winning a Yomiuri Award, Japan’s equivalent of the Pulitzer. Frank Galati, Tony Award–winning director and adaptor has fashioned an enchanting and deeply moving play out of two of Murakami’s short stories. AFTER THE QUAKE is a gentle tale of life in the wake of earth-shaking disaster. A timid man woos an old flame, enchanting her anxious daughter with whimsical bedtime stories of a six foot frog’s fight to save Tokyo. Company One invites you to experience a testament to healing and hope in an increasingly vulnerable world with what promises to be a beautiful and mesmerizing evening of theatre.

It is an elegant, economic, gently hypnotic piece of theater
- New York Times

An elegant and sleek meditation on the reverberations of trauma adapted for the stage from a collection of stories by Japanese writer Haruki Murakami.
- Bill Marx, The Arts Fuse

Kudos to Company One for staging an engaging work
- Bill Marx, The Arts Fuse

[a] delicate and moving production
- Louise Kennedy, The Boston Globe

August 6, 2009
'After the Quake' Provides Rare Showcase for Local Asian Actors by Color Magazine
July 25, 2009
'After the Quake' Enchants by Nancy Grossman, BroadwayWorld.com
July 24, 2009
'AFTER THE QUAKE' ON 'CENTER STAGE' by Jared Bowen, Greater Boston WGBH
July 22, 2009
’After the Quake’ a must-see at the BCA by Jules Becker, South End News
July 22, 2009
In ‘Quake,’ the aftershocks tell all by Louise Kennedy, The Boston Globe
July 22, 2009
"After The Quake" by Larry Stark, The Theater Mirror
July 21, 2009
Company One meshes Murakami by Carolyn Clay, The Boston Phoenix
July 19, 2009
After The Quake by Kilian Melloy, EDGE Boston
July 17, 2009
Seismic activity, and its aftermath by Joel Brown, The Boston Globe
July 15, 2009
地震之後 亞裔演員舞台飆戲 by Chinwen Lee, World Journal
June 30, 2009
Company One to present 'After the Quake' by Donn Saylor, Examiner.com