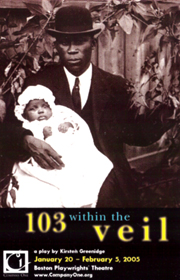 A World Premiere by Kirsten Greenidge
Directed by Victoria Marsh

1966: A Boston janitor dies his life seemingly unremarkable. 1976: One hundred and three glass negatives are discovered in his basement. Hauntingly defiant, the sitters in the photographs demand attention. They insist that the veil hiding them from Boston's history be lifted forever. Mystery and image combine to tell the story of Hubert Collins, one of Boston's first black photographers, whose life dissolved into obscurity after the close of his Roxbury studio. Don't miss this world premiere from local playwright Kirsten Greenidge, heralded by the New York Times for her "colossal imagination."