Last Wednesday, Company One Theatre was one of 11 speakers at the 2014 IDEAS UMass Boston conference, an “event where some of the the region’s leading thinkers from every imaginable sector push boundaries and share their latest big ideas to create fertile ground for innovation.” Learn more about the history and mission of the IDEAS conference here.

Below, find the speech that C1’s Director of New Work, Ilana Brownstein, delivered. It was followed by a performance excerpt from BRAHMAN/I: A ONE-HIJRA STAND-UP COMEDY SHOW by Aditi Brennan Kapil, part of THE DISPLACED HINDU GODS TRILOGY, currently in production until Nov 22.

Thank you so much for having us here this afternoon. My name is Ilana Brownstein, and I’m the Director of New Work at Company One Theatre, in residence at the Boston Center for the Arts in the South End. This season, we’re 16 years old. We were founded by graduates of Clark University who took the school’s motto to heart: “Challenge convention. Change our world.”

From our founding, we’ve been dedicated to changing the face of Boston theatre by uniting the city’s diverse communities through innovative, socially provocative performance and developing civically engaged artists. Our audiences come from most of Boston’s 16 neighborhoods, and primarily from Dorchester, JP, Roxbury, Allston/Brighton, and Back Bay. Coming to a Company One show means, at its heart, being in a room that feels like the city. You’re with a wide variety of different kinds of folks – different ages, backgrounds, classes, and colors – who see a show together and, on our best days, make a connection with each other, through the art, to the world.

While the American theatre as a whole struggles to find its footing with young, diverse audiences, we’re proud to say that through the programming of challenging plays that feature voices not otherwise given space on Boston stages, and through the mentoring of artists of color, we have an audience base that is 55% under age 35 — and is 35% people of color.

We’re often asked by peer institutions how it is we’ve achieved these kinds of numbers – what initiative we’ve undertaken, or what new program we’ve conceived. The truth of the matter is both simpler, and more difficult to implement – it’s about a ground-up commitment to social change, cultural equity, and the responsibility of the artist to making the world we live in tangibly better.

The structure of Company One Theatre is that of a collective where we practice joint decision-making and shared company responsibility. That’s unique enough in the Boston theatre scene, but additionally, our collective is comprised of mid-career professionals working side by side with emerging, early career artists.

We carry this model into our productions, employing young actors, stage managers, designers and production staff. Our Education department brings accomplished artist educators into Boston Public Schools, and our exceptionally successful apprentice program, funded through Department of Youth Engagement and Employment (formerly known as the Boston Youth Foundation) cultivates very young artists of color, largely on the production and design side, rather than the acting side.

There’s an ongoing crisis in the theatre – many companies around the country bemoan their inability to find or recruit production and design staff of color. To our mind, the solution lies in bringing high school students into early collaboration with professional artists, and helping them see that there’s a path available to them. We think of this as the teaching hospital model of theatre, and it’s what guides all our decision making.

Our vision is this: Company One is Boston’s theatre for the people. We stand at the intersection of art and social change. We aim to be a national leader for audience engagement, artist development and the creation of new work that pushes boundaries, by presenting issues and events critical to the progress of society. We are committed to community engagement, collective decision-making, transparent communication, and maybe most of all: mentorship.

We often say that none of us love “The Theatre” enough to do this all just for the sake of the art, we need to be seeing a tangible positive impact in the city as the result of the art we make.

Aditi’s work is perfect for Company One, and, we think, for Boston. She specializes in outsider characters whose perspective illuminates our world as a whole. The character you’re about to meet, Brahman/i, is intersex, which means B was born with both male and female genitalia. The play, framed as stand up comedy, portrays B’s journey towards coming to terms with their fluid identity, and their place in the world.

BRAHMAN/I, and the other two plays — SHIV, and THE CHRONICLES OF KALKI — are in performance now at Company One Theatre, through Nov 22. We’d love to see you there, and if you’d like more information, we have brochures in the back of the room.

So. Without further ado, here’s B…. 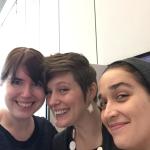 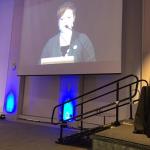 Ilana on the big screen 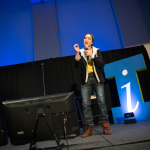 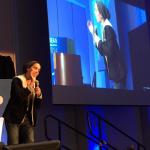 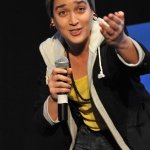