“With a slate of shows that consistently capture the zeitgeist, Company One is the city’s most vital and diverse small-theater troupe. The past season was highlighted by Every 28 Hours, a vast project consisting of 80 one-minute plays penned by more than 40 authors, all highlighting the shocking statistic of how often an African-American person is murdered by a vigilante, security guard, or police officer.” – Boston Magazine

“A company that consistently punches above its weight, Company One Theatre lived up to the name of its latest season, “Break Every Boundary,” bringing dynamic drama to unexpected settings. They presented the first-ever full-scale production at the Boston Public Library with Peerless, a modern take on Macbeth starring mean-girl twins with perfect SAT scores and deadly ambition. For the New England premiere of Jackie Sibblies Drury’s Really, a play set in a photography studio, they turned a South End gallery into an intimate theatrical space, one that allowed audiences to take in a complementary photography exhibition after the show. And they brought 80 one-minute plays to the MFA for Every 28 Hours, a performance in support of the Black Lives Matter movement. We’re on the edge of our seats for season 19.” – Improper Bostonian 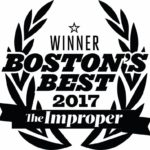 As we wrap up our expansive eighteenth season — one that has humbled us and earned us the recognition of Best of Boston — we want to shine light on the collaborators and partners who made this season possible, and thank them for taking a chance on >>What’s Next.

We extend an enthusiastic hat-tip to our core collaborators Boston Center for the Arts, Boston Public Library, BCNC Pao Arts Center, Matter & Light, A.R.T.’s OBERON, and the Museum of Fine Arts, Boston, as well as all of the individual actors and organizations (Boston Arts Academy, Central Square Theater, Harvard University’s Black CAST and the The Theater Offensive) who joined us on-stage for The Every 28 Hours Plays – Boston.

AND OF COURSE, a big huge thank you to our donors, subscribers, and audiences who continue to bring the love. We couldn’t do it without you!

END_OF_DOCUMENT_TOKEN_TO_BE_REPLACED

To celebrate the 25th anniversary of the Americans with Disabilities Act on July 26th, HowlRound published a series of pieces focusing on issues of accessibility and visibility in theatre, which included a piece on our summer production COLOSSAL.

END_OF_DOCUMENT_TOKEN_TO_BE_REPLACED

“Let’s get one thing straight: Fringe isn’t synonymous with small. In fact, the fringe companies in town are all about big ideas, big risks, and big heart, none more so than Company One Theatre, a long-standing resident of the Boston Center for the Arts. Dedicated to performances you aren’t likely to forget (did you see the perfectly perturbed Shockheaded Peter ?), Company One should be celebrated not only for its adventurous theatrical achievements, but also for its efforts to carve out a more diverse, informed, and open-minded city.”

END_OF_DOCUMENT_TOKEN_TO_BE_REPLACED “Aditi Kapil’s DISPLACED HINDU GODS TRILOGY was groundbreaking in more ways than one-play plays shone a spotlight on the contemporary American experience shared by the millions of kids hailing from multicultural backgrounds and addressed issues of intersectionality, gender identity, and dysphoria in an era of post-colonialism.”-DigBoston THE FLICK and WE ARE PROUD TO PRESENT… are listed in the Boston Globe and WBUR’s The Artery for best theatre in 2014. CLICK HERE TO READ Don Aucoin’s 2014 Theater Picks and Company One Goes To Town In 2014; ArtsEmerson is a Great Host

“Annie Baker is such a wonderful writer and Shawn LaCount, artistic director of Company One, gets her perfectly. Every pregnant pause, every perceived slight, every poignant attempt at reaching for something of sustenance resonated soulfully in this play set in an independent movie theater where Baker’s trio prove to be more than lost souls.”-WBUR’s The Artery “When faced with limited resources in a competitive arts environment, some theatre troupes might play it safe, perform old favorites, try to draw the “usual” theatre crowd. Not Company One.”

CLICK HERE FOR THE FULL STORY: 11 Ideas from Boston “Performance can engage audiences in current issues, introduce them to new cultures and ideas through storytelling, and create memorable experiences. Company One, with its highly ambitious philosophy that mixes artistic excellence with admirable values, has managed to create a community of artists interested in making meaningful connections with their audiences. The company has received numerous awards and accolades for its work, such as Elliot Norton and IRNE awards. Currently in their 16th season, the company stands strong with productions like The Displaced Hindu Gods Trilogy and Colossal.”

CLICK HERE FOR THE FULL ARTICLE:
THEATRE IN BOSTON YOU SHOULD PAY ATTENTION TO

“Company One consistently presents works that offers unapologetic, bold, and often humorous insights into and criticisms of our society. And the talent they put front and center is damn good, too.” -DigBoston

CLICK HERE TO READ THE FULL ARTICLE: PLAYS AND PLATES “Company One is the hottest small theater in Boston — one of the hottest theaters of any size, really — so miss its summer show at your own peril. We’ll let the company describe this one: “ ‘Astro Boy and the God of Comics’ serves up live animation, interactive video, and a 1960s dream of the future.” -WBUR’s The Artery

CLICK HERE TO READ THE FULL ARTICLE:
11 Theaters To Hit This Summer — It’s Time To Gas Up