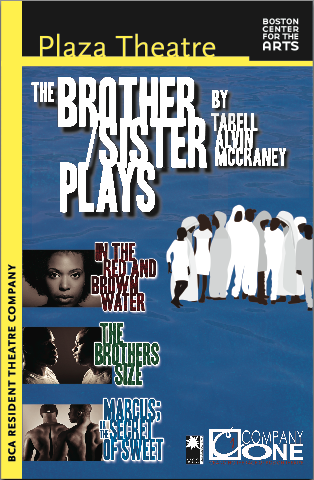 Directed by Megan Sandberg-Zakian and Summer L. Williams
Dramaturgy by Philip Berman and Corianna Moffatt
October 28 – December 3, 2011
The Plaza Theatre @ The Boston Center for the Arts

Tarell Alvin McCraney’s The Brother/Sister Plays are dangerous, modern-day stories of kinship, love, heartache and coming-of-age. McCraney speaks with authenticity about a world that is gritty and lyrical, urban and mythic. One of the most startling new American theatrical voices of the 21st century, McCraney is thrilling audiences internationally by pushing the boundaries of language, form, and sexuality in provocative and poetic ways.

THE TRILOGY WILL BE PRESENTED IN TWO PARTS

Produced on alternating nights, you can experience
Part 1: IN THE RED AND BROWN WATER one night, and
Part 2: THE BROTHERS SIZE and MARCUS; OR THE SECRET OF SWEET the other!

IN THE RED AND BROWN WATER
Oya can run faster than anyone, but not fast enough to escape her fate. When pressed to choose between her dying mother and her dreams of escape, she makes a life-changing decision. Her journey from the promise of youth to the complicated yearnings of womanhood is a joyous, raucous, brazenly theatrical experience.

THE BROTHERS SIZE
Am I my brother's keeper? After a homecoming in the bayous of Louisiana, the Size brothers, Ogun and Oshoosi, try to start fresh. This haunting, funny, and heartbreaking tour de force probes sexuality, coming of age, and the bonds of family as the brothers struggle to discover identity and to unearth a new sense of freedom.

MARCUS; OR THE SECRET OF SWEET
Sixteen year-old Marcus is having some startlingly “sweet” dreams that feel more like a bad omen. As the Louisiana air thickens, Marcus begins asking questions about the father he never met, and getting closer to a secret they both share. MARCUS, with its warmth, myth, humor, and Louisiana patois, is a magical coming-of-age story about the storms of sexuality and identity.

Should not be missed!
- The Boston Globe

POWERFUL...will linger in your mind long after you leave the theater!
- EdgeBoston